What Do We Stand For?

At SPS we endeavour to be a centre and focal-point for the local Jewish community and their families whether religious or secular.

SPS is run by an elected Council, comprising the Executive – Chairman, Vice-Chairman, Hon Secretary and Hon Treasurer – and a maximum of 9 Council members.    During the first 2 years with a new Chairman, the Vice-Chairman is elected from within Council.  In the 3rd year, the Chairman Elect is elected and automatically takes on the office of Chairman the following year.

SPS has a Life President and Life vice-president who are entitled to attend Council and also have a vote.  Council can also recommend long serving members to become Hon vice-presidents who are ratified each year at the Annual General Meeting.  Although they receive all the papers sent to Council members and can ask to attend a Council meeting, they do not have a vote.

The Rabbi attends the Executive meetings and also Council as well as Education and Religious Activities Committee.  Although the Rabbi can have a voice, he/she cannot vote.

The Synagogue Administrator can also be invited to attend Council meetings and the AGM, again with no vote.

SPS is a registered Charity (Charity number 239096)  and our governing document is our written Constitution, which is updated from time to time.

In 1943, during the dark days of the war, a handful of families who had moved from Stamford Hill to Southgate but who were anxious to keep up contact with North London Liberal Synagogue, (NLLS) decided to insert adverts in the Jewish Chronicle and local papers inviting interested parties to contact them.  From such humble beginnings there arose Southgate & Enfield Progressive Synagogue.  Following the ideals of the founders of the Liberal Jewish movement, they were determined to build a community of like-minded Jews - people who were looking for a form of their religion that was meaningful and relevant to 20th century Britain and one that provided equal status for men and women in Synagogue life.  To begin with, the first meetings were held in each other’s homes.

After receiving an official communication from Lily H Montagu, (dated 8th December 1943), Rabbi Dr Rudolph Brasch, who was also the Rabbi at NLLS, was encouraged to proceed with the new congregation and he became our first rabbi. Our link with NLLS continued with the arrival in 1948 of Mr Solomons, a lay leader and Rev Lewandowski, a cantor.

In 1950 our name changed to Southgate & District Liberal Synagogue and in 1989, when our purpose built Sanctuary was dedicated, our name was once again changed, this time to Southgate Progressive Synagogue.

The present site was acquired in 1954; the original house, later named Richard Michael House, is now used as administrative offices, by the Religion School and other Synagogue groups. The building is also used by a special-needs school during term time. What was the large garden is the site of the Schindler Hall and provides High Holyday seating for 450 congregants and for 160 at sit-down functions.

In 1989, we opened our purpose-built Sanctuary, situated alongside the house. 160 congregants can pray in this beautiful and tranquil space. The whole self-contained complex serves the needs of some 650 members and their children, with a wide range of religious and secular activities. Now in its eighth decade, SPS continues to develop as a warm and friendly community and we aim to make everyone feel very welcome.

In 2002, when NLLS closed its doors, many of their members joined SPS, thus continuing the link between both communities.

SPS an active constituent of Liberal Judaism and is represented on the Board of Deputies of British Jews. The Synagogue is a supporter of the Leo Baeck College - Centre for Jewish Education, in Finchley.​ 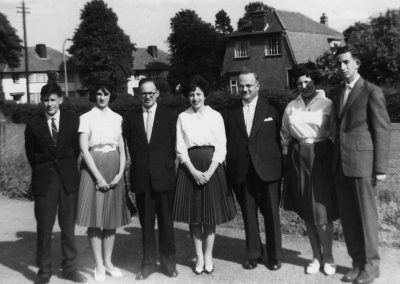 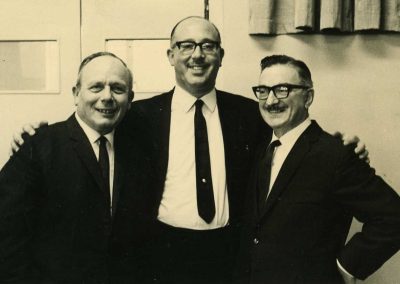 Movers and Shakers from the 1980’s